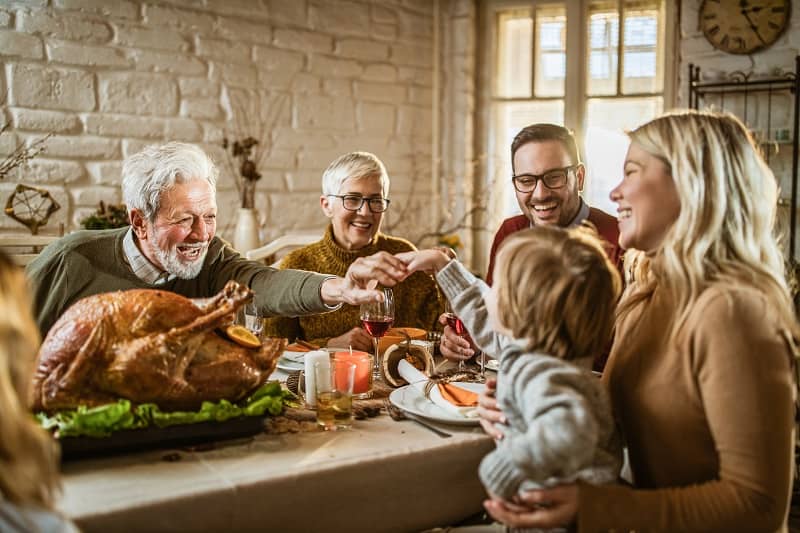 Growing up on a generational farm in south Clackamas County, our Thanksgivings were filled with food, family and football. My mother was a cook extraordinaire. Our small flock of relatives traveled to our farmhouse not so much for the delight of being with each other as it was for my mother’s cooking. That was always the hook.

My mother spread the love with her cooking and service to her extended family as each person would depart with leftovers. Behavior was always important to our parents and we kids were strictly forbidden from fighting or disagreeing on discussion topics or become lazy when it came time to wash the multiple sets of China and fancy silverware that mom insisted we use for these occasions.

One of my favorite stories about Thanksgiving came from my father. He grew up on a turkey farm during the depression where his family ate turkey all the time. He hated turkey. My mother loved turkey and considered it a treat. Each Thanksgiving, my father would dutifully eat his turkey after he meticulously carved the perfectly prepared bird. He did this because it gave my mother great joy.  For him it meant more to see my mom happy than it did to adhere to his own dislike of turkey. It wasn’t until I became an adult, did I realize this. The lesson of love was not lost on me as I marveled at how my dad could stomach a food he found distasteful.

Moving forward to this year of 2020 with so many firsts and divisions among family, friends, and social media folks, I see a lot of behaviors that my family would not tolerate. The lesson my father taught me was you can accomplish whatever you want to with enough determination. He taught me that just because you have a certain belief system, that it does not mean it is always absolute especially if it hurts another person. He ate the turkey he disliked.

Today, my observation is many people are tightly adhering to their belief systems as if life itself depended on it. We are living in troubled times of Covid-19, shutdowns and raging wildfires that destroyed homes and life. Couple that with our politicians acting like spoiled brats where us kids would have been taken to the woodshed for such behavior. (Oh by the way, we did have a woodshed.) I yearn for a return to the values I learned growing up. Today’s political divisions are so vast that I wonder if we can ever come together again and remember what is important.

If this sounds like a sentiment from a love child growing up in the 1960’s, so be it. Love and unity can fill hearts just as easily as hate and disagreement. Behavior is always a choice. My dad showed me how that works. It starts with the little things. It always starts small. He knew this and always ate the turkey. It was a small concession borne out of love for his wife and family. Peace was more important to my dad than whether he ate turkey, besides mom fixed about 20 dishes so he had a lot to eat.

Many factors have led up to the great divide of 2020 — the year people want to end and forget. But we must never forget because we must learn and evolve. The difficulties of 2020 offer us many lessons and experiences that can make or break us. The choice is ours. Let’s take a step back and breath. Love, kindness and compassion leads to understanding. Understanding will accomplish much more than a well-placed verbal barb, Molotov cocktail hurled during a protest, or even victory for your favorite political candidate.

Rising above what divides us will be a challenge. We must and will learn to adapt. I know this sounds quaint but, for 57 years of my life I didn’t think our Thanksgivings would ever end.  For my family, the traditional yearly event came to a screeching halt on October 8, 2015, the day my mother died. I sunk. I lost my biggest fan, and my heart broke into pieces. What I wouldn’t give to relive just one more Thanksgiving with her.

Moving forward, my family adapted and changed in ways I never thought possible. Initially, there was a big divide among family members after her death.  I grew to understand that it was my  mother’s presence to calm the clan, to instill respect in our family unit and not my father’s. Mom’s love was missing, and the gap widened as our family fumed and fought. Dad remained silent on the sidelines just as he always did. Would our family ever learn to rise above, to instill those same values within ourselves and the future generations? It didn’t seem so. There was much at stake. Regretfully, some of those divisions still exist today. What I learned from the split in our tight knit family is that the only behavior one can control is our  own. The expression “I am not my brother’s  (or sister’s) keeper” comes to mind as I watched fights and disagreements arise that should have been extinguished. For some people, there was no returning, no going back to the way things were, and that is sad for me. I have observed a stubbornness to tightly held belief systems that I didn’t fully understand. I now see how that parallels society today. When a belief system does not include love or respect for other family members, it hurts all of us.  That hurt often echoes out. I learned that each person, regardless of their position has a responsibility to give love. It’s not about what we get in return, it’s about what we give.

The great political divide in American today rivals many families as we all struggle for our own identities.  America is now forming a new identity again as it did over 200 years ago when the founders formed our great union. Divisions seem to be the speak for the day as Covid keeps a grip on behavior and people highly relate with politics like never before.

The same year of mom’s death, delight came for me in a big way as I was rescued from trying to copy my mother’s superb cooking. Her grandchildren who spanned in ages from 20 to 30 years of age decided to take over the preparation of Thanksgiving dinner from the “adults.” The kids didn’t say why they wanted to cook, but I suspect they observed myself and my sibling’s grief as they decided to take over the leadership mantle. My sister offered up her brand-new kitchen and large dining room for the event as she did not like to cook. I was taken aback by the insistence from the grandkids to cook since I didn’t have high regard their abilities to prepare such a large meal, or any meal for that matter. But I remembered a lesson from my Aunt. She always accepted my wild ideas as a youth although I secretly knew she questioned them.  She always supported me, for which I remain grateful. And I took that lesson from my Aunt and applied it to our new upcoming family Thanksgiving tradition.

As my family has now spent five Thanksgivings without the matriarch who made them great, I reflect upon our own Reboot. The third generation has taken on the responsibility and joy of preparing our Thanksgivings filled with food, family and football. Is the experience different? You bet it is. We use paper plates as mom’s China sits in the cupboard. Is the food the same as my mom’s? Of course not. But it’s still delicious with new recipes and a new style of doing what was old. My dad is still eating the turkey he dislikes because he always has.

What I gained in return is quite the lesson. What I learned from them was when you give love, it returns tenfold because people see it and they subconsciously need it. Our human conditions require it.

Looking outward, it’s hard to see a connectedness of minds or spirits in our socio/economic/political culture today. My parents shared love, but they also shared their dislike, or like of turkey, while keeping the family unit together. They never took their eyes off the ball or the bird of what was important in life.

It is indeed possible to make the world a better place and it starts and ends within our own hearts.

Tootie Smith has spent several decades serving in Oregon politics as a volunteer and elected official. Is a business owner, and author. She is the newly elected Chair of Clackamas County Commission.