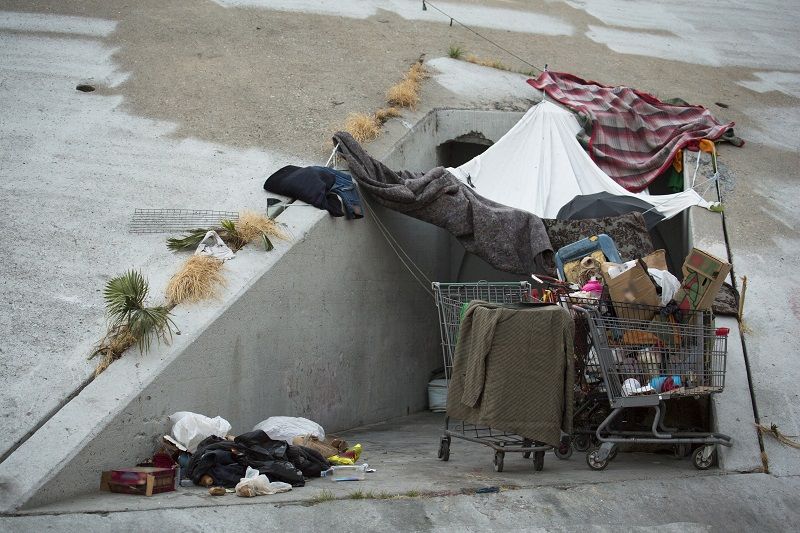 The scourge of homelessness has taken over downtown Portland the past few years.

Tents and piles of garbage are visible from multiple freeway exits and cluster all throughout the city. This problem has now spread beyond Portland and into many other cities throughout the state. We’re even seeing it in parts of Clackamas County.

Politicians are quick to suggest that more government programs, and more of other peoples’ money, will be needed to solve it. But what they fail to recognize is that government policies have been a huge part of the problem in the first place.

It’s true that Oregon suffers from a lack of affordable housing. What many people don’t know is that it is largely self-inflicted.

In 1973, the legislature passed Senate Bill 100, which established a statewide land use planning system. SB 100 and the bureaucracies it set up deliberately restrict the amount of land that can be used for housing.

Simple supply and demand states that if you artificially restrict the land that houses can be built on, the cost of that land will increase. And that’s exactly what has happened.

One of the reasons housing is so expensive in the Portland area is because the Metro council voted unanimously in 2015 against allowing more land to be used for housing.

Another reason is the layers of bonds, levies and property taxes proposed by various government agencies and passed by voters. Many voters who rent their homes are unaware that the increased costs of those measures end up being added to their rent, making their housing more expensive.

For example, Metro asked for over $600 million in bonds payable from property taxes for the sake of creating more affordable housing. Voters passed the measure in the November 2018 election and have very little affordable housing to show for it. I don’t expect this to change.

Governor Brown is also suggesting another tax on homes in the name of making housing more affordable. Oregon voters overwhelmingly passed Measure 79 during the 2012 election. That measure placed a permanent ban on real estate transfer taxes in the Oregon Constitution. But Brown now wants to undo the will of the people and use real estate transfer taxes to fund affordable housing projects.

In top of all that, Metro is proposing yet another measure aimed at giving its bureaucracy more money in the name of combating homelessness.

Do you see a pattern here? Government agencies create a problem, make it worse, then demand more money in the name of solving it. Those attempts to solve those problems often end up perpetuating them. In the end, we have the same problems, except they become institutionalized, bureaucratized, more expensive and worse than ever before.

The homeless issue in the Portland area is the result of supply not meeting demand. In other words, there are not enough available housing units for the number of residents who continue moving to the area.

What we should be doing instead is adopting policies to decrease the cost of buildable land by increasing its availability. Giving more taxpayer dollars, through increased property taxes and bonds and levies to be paid by property owners, to the same agencies that created the problem in the first place will never solve it.

As chair of the Clackamas County Board of Commissioners, I will work to prevent homelessness by advancing policies that promote affordable housing through common sense approaches. I will also work to make the American Dream of homeownership easier to obtain for residents of the county.

We are at a critical crossroads on these issues. It’s clear by now that a tax-centered, bureaucratic approach to housing issues has resulted in more taxes, more bureaucracy, more homelessness and less affordable housing. I am running for Clackamas County Commissioner because I believe the current approach is not working and it’s time to do something different.